This little adventure came to being because of a post I stumbled across on Facebook over the weekend.

An acquaintance had posted about their Sunday spent trying to keep their willpower in check by not succumbing to the temptations of the food truck that was located outside Crafted at the Port of Los Angeles that day. As a side note, Crafted is where the bricks & mortar shop, Honey & Ollie, is located. Should you not happen to be local to her little ‘verse, the amazing Rain Hannah also has a Honey & Ollie etsy shop where you can find all her beautifully created lovelies.

The creation she was trying to avoid sounded just as terrifying to me as it did to her: deep fried chicken inside two waffles, dipped in buttermilk batter, deep fried again, and then served with syrup & powdered sugar.

That is one terrifying creation at a glance and I couldn’t imagine being faced with something like that. Rain’s far more acceptable meal compromise was just simple chicken & waffles — one waffle and one drumstick, preferably from Roscoe’s Chicken & Waffles. Seeing as we don’t have any restaurants even remotely resembling Roscoe’s in Canada, I chose to make as much as I could myself.

Interestingly enough, there appeared to be a few signs pointing me in the direction of making chicken & waffles from the get-go, not including that post:
1) we had some leftover fried chicken in the fridge from the weekend that was still uneaten, which certainly made for a happy coincidence.
2) we had been given just under a 2L carton of buttermilk to use as I pleased since The Hubbs’ sister had no use for it after her hubby made her a birthday cake.

All that was left for me to do was find a good waffle recipe!

I have to admit, I’ve never really had a taste for waffles for some reason. Maybe it’s because waffles only ever come as a sweet creation on restaurant menus and never with savoury options, unlike french crêpes or dutch pannenkoeks, for example. I guess chicken & waffles are as good a savoury option to start with as any. Though as a side note, I read somewhere that a creamy chicken stew on top of waffles is also tasty option, which means it might also deserve a taste testing sometime in the near future seeing as I have all sorts of waffles leftover.

The recipe I used for the waffles was one I found on allrecipes.com and included yeast. The inclusion of yeast in a waffle recipe intrigued me because most recipes I’ve used in the past have always called for egg whites to be whipped until light & fluffy before being incorporated into the batter as to give the waffles extra airiness. Honestly, though, I am way too lazy to do that. I hate having to wash extra dishes, so I tend to avoid the recipes that require the egg white step, even though it may actually be crucial to having a really good waffle in the end. Yeast, on the other hand, gives your waffles the rise without all the work! Fancy that, huh?

So my verdict on chicken’n’waffles seems to be a win-win meal situation all around. It made excellent use of leftover fried chicken in a way that I never realized, and we get extra waffles to freeze for quick breakfasts at a later date. I think this may be my go-to solution from now on and I am pretty pleased with how it all tasted, which seems pretty silly to say, but I think it deserves to be acknowledged. 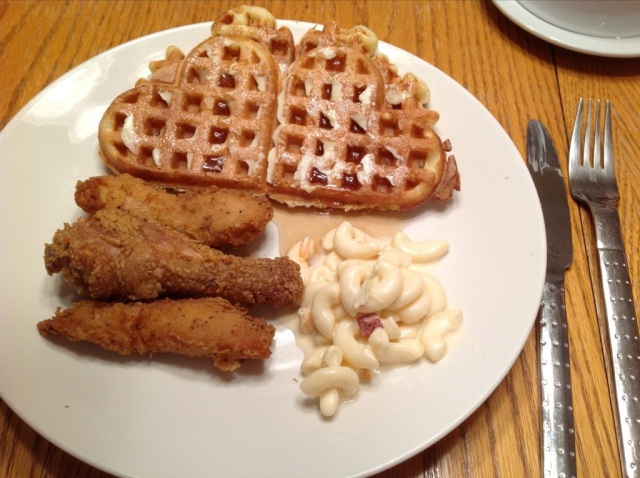 In a small bowl, dissolve yeast in warm water & let stand until frothy.
In a large bowl, mix together flour, baking powder, baking soda, sugar and salt.
Add yeast mixture, eggs, buttermilk and vegetable oil & stir until smooth.
Optional (though highly recommended): Leave batter in a warm place for the yeast to grow!
Preheat waffle iron and grease as needed.
Pour batter into waffle iron and cook until golden brown.
Serve waffles hot with butter and maple syrup or your favourite topping of choice.